Do you need visualisations in dashboards?

Some time ago on LinkedIn, a thread ran about the value of visualisation in dashboards, which a debate that always sparks varying opinions...

Some time ago on LinkedIn, a thread ran about the value of visualisation in dashboards. It is a debate that has been running amongst dashboard and report designers for ages. There are two camps. In one camp are those who believe that information should be presented in a table, or a matrix.

There’s a point behind this. Information in BI nearly always is a number. Number of sales. Number of recalls. Time spent on site. Failure rate. And so on. The simplest way to present a number is to write out the number. So a table full of numbers conveys more information than a picture of bars, lines, or pies. Eye candy, they might call it. Strictly speaking, this is true. Numbers are more space efficient than charts, so more information can be presented in a table. The other camp will say that it’s all very well having yet another number to show how many numbers you can show, but the most efficient way to package information on a page is not the most efficient way to transfer information into the reader’s mind. Humans recognise, respond to and decipher changes in colour, size, shape and contrast more quickly than we can decode a range of numbers.

Learning from the masters

If you want to find the people who have the most experience transferring information on a dashboard, look to the history of the dashboard itself. The earliest dashboards, on horse drawn wagons, were just boards. When transport got motorised, the engine’s health needed to be monitored, and the dashboard gained its instruments.

Aircraft use instrument panels but the requirement is the same. For a pilot, the situation can change very quickly, and the life of the pilot, crew and passengers is dependent on the pilot maintaining situational awareness. Thus the instrument panel of an aircraft needs to communicate vital information, relevant to the current situation, to the pilot clearly and quickly. Modern commercial aircraft have replaced traditional gauges with digital screens, commonly called a “glass cockpit” A pilot friend of mine once spoke about how, with a gauge, he could tell not only the reading the needle was pointing to, but from the movement and speed of the needle he could see the rate of change. With some of the first glass cockpits he flew in, this vital parameter was missing. He just had the number, which updated regularly, and it was hard to interpret the magnitude of the change. The last time I had spoken to him, he had changed his mind about glass cockpits, and was much happier about the situational awareness they gave him. New graphic devices had been introduced to fill the gap. Things had clearly moved on.

As my pilot friend discovered, when controlling a vehicle there is an indisputable safety advantage to being able to scan the instruments at a glance, process the information they are giving you immediately, and getting your eyes straight back to the outside world. Old fashioned dials and gauges are good at this.

A pilot knows that if the airspeed indicator needle is moving, or the altimeter is spinning, and neither are expected at the time, then the situation is changing and the pilot needs to act and rectify. Far easier to do this by seeing a simple pointer moving up or down, than to read a five digit altitude number off a screen and recall if it is higher or lower than it was on the last scan, and work out how quickly it is changing. This is why digital instruments quickly moved away from plain old numbers and towards animated symbols or objects. 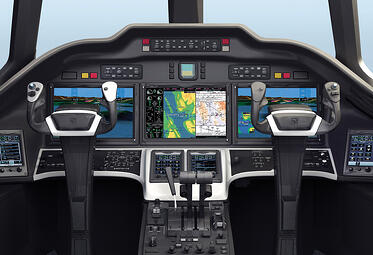 The same lessons apply on a business intelligence dashboard, to an extent. If you have month on month sales as a table, you can see if they are improving or not, but you must evaluate each number in turn. And to do that, you need to read and understand the number, and then to convert the characters you see into a meaningful idea in your mind. If you present month on month sales as a line chart, you don’t need any numbers at all to show whether sales are booming or slumping. Sales aren’t likely to tank so hard that you need a spinning needle to keep up, but it is still a lot easier and more reliable to read trending from a line that is climbing or falling than it is to piece together the same picture from a sequence of numbers.

I mentioned in my first paragraph that charts are not the most space efficient objects to have on a dashboard, but this in itself can be a blessing too, forcing the designer to choose carefully what information to display and ensuring that only the most important KPIs make it to the dashboard, and sparing the reader from information overload. Differentiation can also be done through formatting. Changes in colours are popular, but when using colours to highlight important facts, be aware that someone with a colour vision deficiency may not be able to process the difference accurately. Other ways to differentiate are weight and contrast. A thick line or a strong contrast will stand out.

If you’ve gathered from all this that I am all in favour of colourful dashboards featuring charts and dials and gauges, you’d be quite right. Most of the time the audience don’t need to know the sales figure down to the last digit, though that doesn’t mean I’d advocate leaving the actual values off the dashboard entirely. For many, it is more important if it has been on a steady decline for the last three months, or if it is not climbing as much as expected on the release of a new product. Or perhaps it is climbing more than expected and threatening to outstrip supply. With all of these, the trend is noticed first, then the detail is explored. And that, in my opinion, is the best way to structure a dashboard to make sure that the points that are really important don’t get overlooked.

We would love to hear from you, do you have any further questions on visualisations in dashboards? Please use the comment field below...

Video is the more powerful medium; we can process visual images 60,000 faste...

Why is visual communication important?

According to Psychologist Albert Mehrabian up to 93% of all human communicat...

BPS World are one of LinkedIn’s most socially engaged organisations

BPS World are announced as one of LinkedIn’s top 25 most socially engaged re...

Are you socially engaged?

BPS World are proud to have been listed for the second year as one of Linke...